My wife and I were having a picnic the other day, as we have taken to doing each week lately. I was looking at the Red Maple leaves, trying to find a near perfect one. I laid a few on the tablecloth that we spread on the picnic table and thought what a nice contrast of colors and patterns. 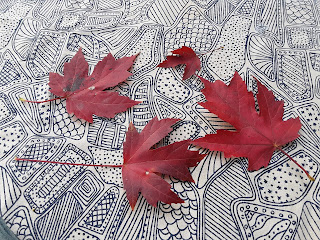 Retro moment! Who knows what this is and what it is used for? How many of you have installed a pair of these at all or with any frequency? 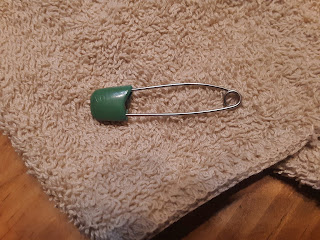 I was supposed to spend a half a day on removing and replacing six rotten boards. The decision was made to forego subsequent repairs by replacing all 56 decking boards. 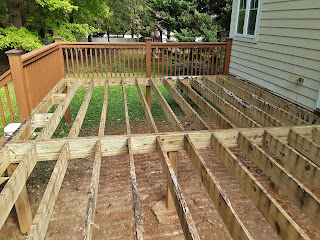 The deeper problems were revealed by removing the floor. The majority of joists were fine, but eleven were not. 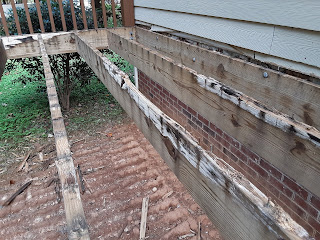 At my son's house, he pointed out an interesting phenomenon. On cold mornings a practically perfect fog oval forms on the atrium door. Note that it does not form on the other pane of glass. Why does it form and why in this shape? At one level, it is easy enough to say that water vapor from the room condenses on the cool glass, but why isn't the whole glass involved? And why are there no corners like the glass has? The other door is completely sealed and does not open. Also, there is a central air vent on the floor to the left of the glass. I would think that the wood is a better insulator than the glass, but heat must be transferring from the wood to the glass so the the center of the glass is cooler. It additionally seems to be a mystery as to why it is cooler in the middle of the glass, since it is a double pane window. 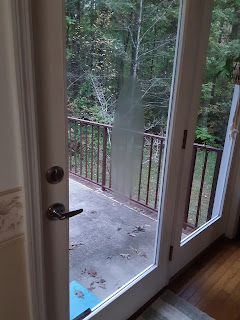 My brother asked if I had the Flexible Flyer sled that we grew up with. I replied that I did not. Instead, I have one that was given to me at the landfill as I and my neighbor were dumping trash off the back of our trucks. I asked why he was throwing away a good sled. He replied that his family was moving to the Deep South and didn't expect to have need of it. I took it home and my children used it a number of times over the years. 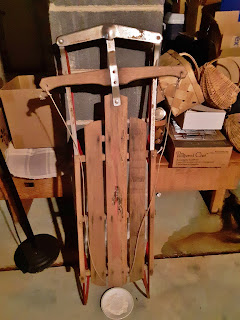 I stepped out my front door to dump the compost bucket. There was the Moon and Venus brightly shining. 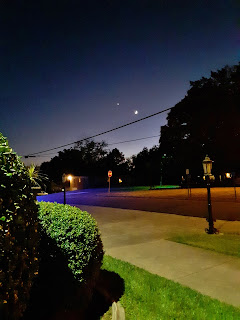 My wife and I had homemade soup for a few days. On the particular evening that I took the pictures, she was having Pumpkin Soup with sausage and Coconut Flour Bread spread with Almond Butter. 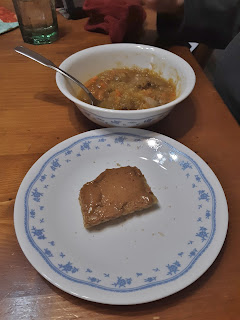 I was having Lentil Soup with chicken. We are grateful to eat well and there is nothing quite like a good hot soup on a chilly evening. 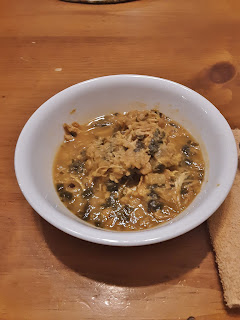 A final random curiosity: I almost waited too long to bring in my succulents. The temperatures have been in the low to mid-thirties for several nights in the last week. On the other hand, perhaps I discovered the trick to getting a Christmas Cactus to bloom well. I have never had one nor seen one with so many blooms. 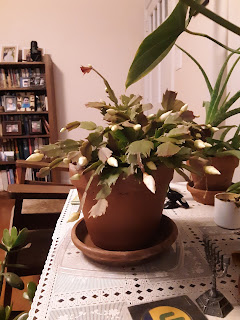 I find that life is only mundane if you don't look around and contemplate the small and great wonders of the world. You don't see great wonders often, but the small ones are abundant and waiting to be taken in. They point to the Creator and Sustainer of all that is.
Posted by leon at 4:22 AM