I never remember to take pictures early on. We began by digging about 30 feet of shallow trench for downspout drainage under the agricultural cloth and gravel. Joists went fast in a day. 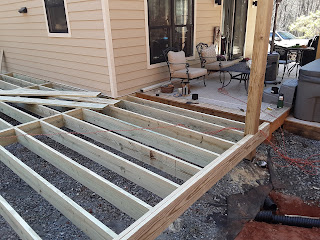 We extended out the ten foot deck 12' and then ran 18' along the back of the house. I always tar the part of the post below grade. Aligning and plumbing tall posts is a challenge. 3 out of 4 were dead on, but the last one was a slight bit off when we went to cutting joists. In deck building, I shoot for 1/32", feel good about 1/16", and accept 1/8" tolerance. Boards have crowns, vary in width by as much as 3/8" in the larger ones, and bow. Some have to be trimmed, which is tedious and time consuming.  The joists went in decently fast. 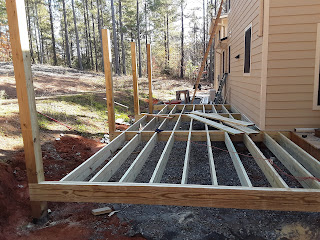 Decking always goes down fast, but with 20 screws per board, it can wear you out after a few hours. Here I am saying fast a second time, so what takes so long? There is always some hiccup of alignment or boards to be cut in as pictured around the posts below or as can you see in the previous picture of the joist into post. Why not just bolt the board onto the side of the post? Regardless of how stout the bolts are, the wood can only hold so much, and it is holding the end of ten joists in this example. 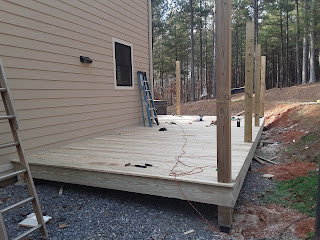 We were trying to match the pitch of the main roof. That was actually quite tricky where the deck turned. I like the sun rays and shadows in this next picture. It looks warm but was anything but. 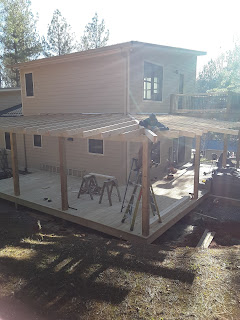 Symmetry and perspective are pleasing to the eye. The Creator placed that desire in us and reveals it in so many ways in His creation. He is a God of order. 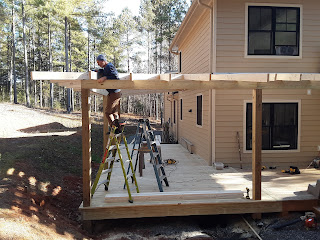 Since the side deck was 10' wide and the back deck is 12' wide the intersection of the two at the corner made an interesting geometry problem. They may put a lath ceiling up later, but if not, I wanted the rafters at the corner to meet. Therefore, they had to be a different distance apart on one side of the corner rafter than the other. The attachment of the corner rafter is crucial. Imagine a record 28", wet snow, and the owner decides to climb up on top to clean it off because of the groaning rafters. It has to support all of that. Four 6" lag screws diagonally through the double beam rafter into the second story floor joists were my solution. I am confident that it will pass the test. 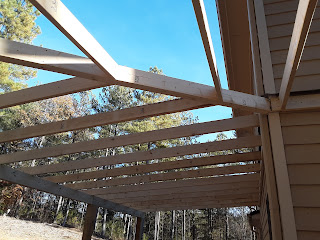 The second story deck was already there when I arrived, but they didn't like the railing and they wanted a roof over it, too. Removing the existing railing posts out of the hole and custom fitting the 6 x 6 posts for the roof into those holes was tedious. Here you see that they are braced by 2 x 4's which double as safety railings. 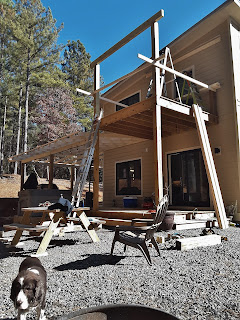 The rafters and roof battens or purlins in place, it is ready for roofing. He special ordered the roofing length and the holidays were imminent, so it was not finished as of this writing. I will get in on that later. 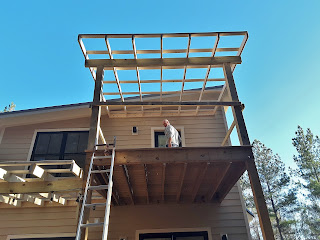 The roofing went on fast, I was told, because I had COVID when that happened and sheltered in bed for two weeks. The fascia will sport gutters later on that drain into the corrugated drain lines, which brings us full circle to how we started. They had already set up the living space and had a party before I returned after the holidays. Everyone seemed happy with the result.