I had to get it home after dark. So, I jury-rigged the plug ends together. You can't see the real artistry of the fix. I had four nails whose heads I clipped off to fit the holes of the female plug ends and forced the sharp ends into the opposite plug ends. This only made connection and worked the lights if I put side torque on the plugs, so I taped a carpenter's pencil between the plug ends to provide the torque. The lights worked without fail the several days I had it hooked up. 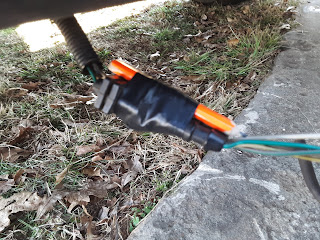 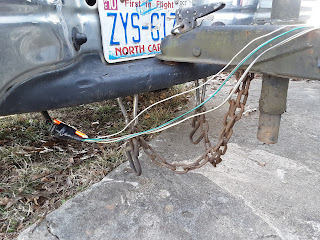 Before I left the house that we sold for what I thought was the last time*, I spied this curiosity on one the carport posts. The spider egg sac in the center was hung for a Spring reveal of the spiderlings. It was the pine fascicle with only two needles that drew my attention. Since we don't have Red Pine in these parts and only Virginia Pine and Eastern White Pine are in the yard, I assume it was the latter with three needles detached. My eye was drawn to it because it was perfectly vertical and held as if displayed in a museum. In reality, upon closer inspection, I saw that the spider's silk had displayed it alongside the egg sac. The features of weathered paint complete the shadow box effect. 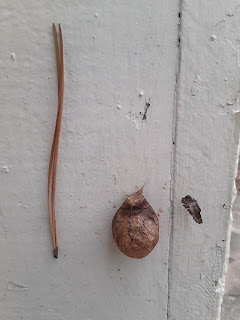