In the mid-30's with the sun shining is ideal for bouldering. It would have been perfect if it hadn't rain torrentially the day before. But it was the first time out after the challenges of recent months, and I was just thankful to be out. 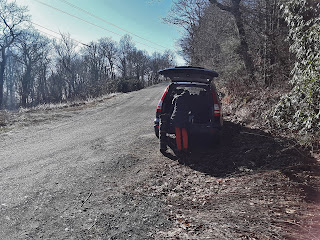 Carrying a refrigerator and mobile home on your back on a trail lined with small trees that 3-4 feet apart is a bit challenging, but my climbing partner seems all smiles and ready to go. 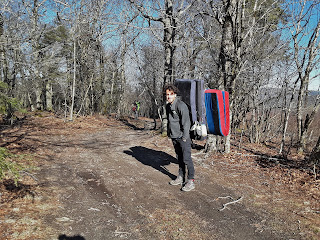 I had one of two small pads and a front pack- pretty chill. 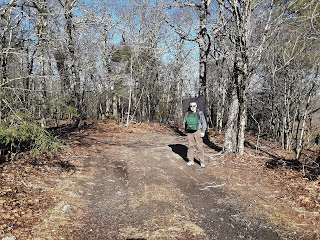 We wondered what to expect as we went up the mountain. In town and most of the way up there was a dense, cold fog. But above that was cloudless blue sky and quickly warming temperatures. 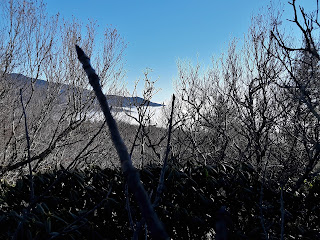 Right next to the first boulder was the top of a fallen tree hung in the fork of another. Somehow it looked bigger and weirder in person. 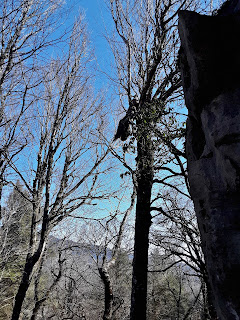 Now down to business. Warm up on some big, cold jugs with plenty of pads and spotters as needed. We cycled around taking turns. A good rest between attempts and visual beta (for non-climbers: information to help you complete the climb) always increase your chances. 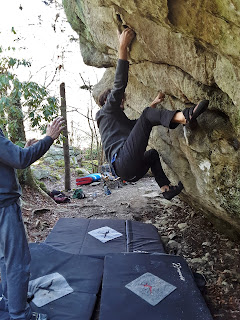 Friend #2, as you will, is long, lean, and intense. He is also Eastern European by birth and I learned some interesting facts about his growing up and transition to the West. 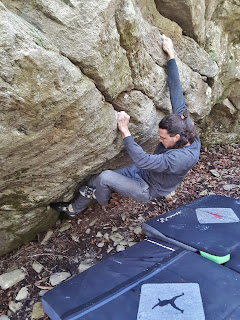 My climbing partner's wife can be quite intense about climbing, but this day she wanted comfort and sunshine. 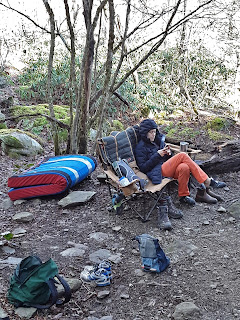 Grandfather Mountain above the trees and fog, oh, glorious day. 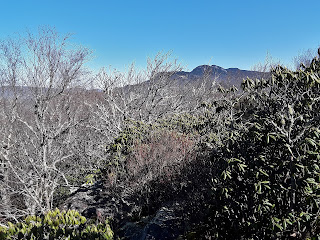 The uppermost low cliff line has a cellphone tower perched atop it. In reality, it was a DOE windmill tower back in the seventies, but variable and high winds required the windmill blades be feathered most of the time to prevent damage, sort of a failed experiment you might say. 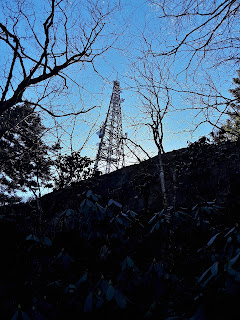 A sit start means just that, you are sitting on the pad and then lift your body up to start the climb. You can see the dynamic power involved in such moves from the low angle of the rock and motion in this picture. 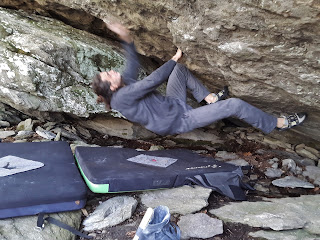 On the same climb she gives it a try, and the sun's rays filter over the lip of the boulder as morning progresses and the potential spotters nonchalantly look on. 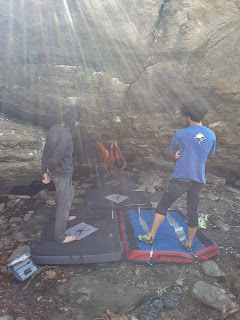 The happy couple catch some rays and smile for the camera. 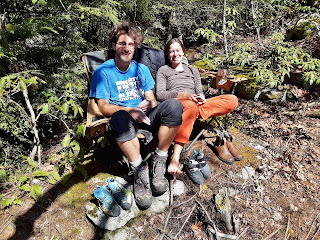 Struggling to make headway on the hard problem being projected, I got the urge to get up top in the sunshine. I scrambled up an easy route and saw this view. Just as I topped out my cellphone intoned an incoming call that could deeply change my future, but the certainty of the offer has since wavered. I am so glad it is a beautiful day. 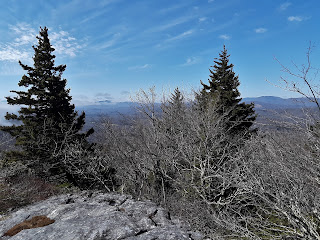 Hump Mountain on the Tennessee-North Carolina border and Yellow Hump to the left pictured next. That is the mountain on which I have hiked more than any other. and it speaks to my heart of things past and potentially future. 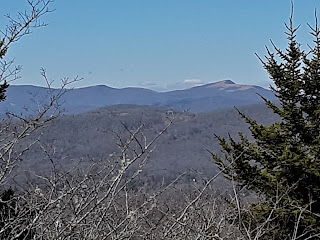 The sun doesn't shine under this boulder until late afternoon. 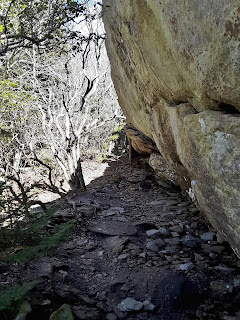 We moved on to another boulder and found a worthy challenge. My two friends were able to complete it after several and many tries, respectively. I could not make the crux (hardest) and final move before much easier terrain. On what was to be my next to last try, my heel hook peeled off and I came down hard on the pads. I thought that only my ego was harmed because there was no pain. I stepped back to become a spotter and started seeing blood on the pad. I looked down to see my hand bleeding profusely and then saw that my pinky pad was torn off. (It bled so much that now, a week later, I never got any infection in it.) I went and cleaned it up and wrapped two band-aids around it to stop the bleeding. Only as we walked out did it begin to throb and intensified as we rode home. (It has healed amazingly well.) I want to go back and complete the climb, but I should at least wait until I have regrown a fingerprint. I have never had a pad rip so deeply. I think it was a combination of all of my weight suddenly on four fingers of my left hand and a minor bit of dehydration. 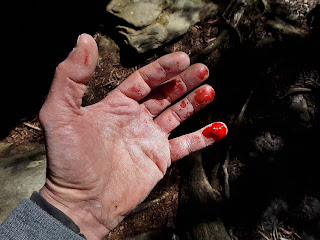 Why do we climb? It's the challenge, the exercise, the comradery, the time outdoors, the elements, the focus that decompresses the mind and body. I am thankful at 62 to still be able to try hard, even if I am not all of that good. God's Creation is beautiful and reminds us of His power and wisdom and the joy and peace He imparts to us. So, I keep going out.