The edge of porches frequently rot due to water damage. The owner was also tired of peeling paint that repainting temporarily solved. He dreaded what might be under the 3 inch tongue and groove boards. My job was to find out and fix whatever I met. It was worse than it looks in this general picture. 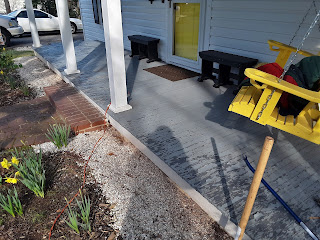 I first pounded in temporary supports for all four posts in order to raise them up and get the old decking out from under the post bases. Only one of those was rotten and had to be replaced. They were non-standard two inches thick. The owner took on the task of making a new one, which he installed after I was done. 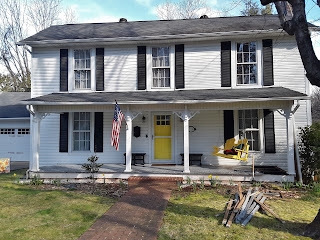 The first several boards removed revealed a beam with significant rot. It turns out that several had such bad places, but all but one were such that I could cut out the top 1 1/2" and replace it with a treated 2 x 4 without compromising structural integrity. 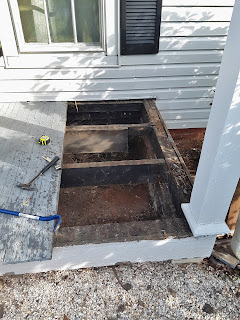 If you look closely you can see wider boards at the bottom of this next picture, which are almost certainly replacement boards for earlier rotten boards near the edge. Besides width and position for exposure to more water, I could tell they were later because they had round nails rather than square, cut nails like the narrower boards. The cut nails were not even consistent in size and may well have been hand cut. These were original porch boards. 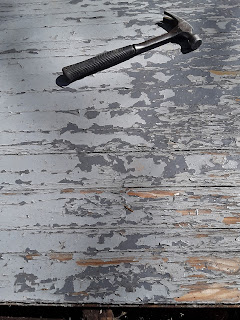 Another section of more easily seen rot, but it was not deep. The beams were oak and may have been white oak which resists rot well. The tar seemed to have protected the wood from moisture for many years and even more from insects and mold. 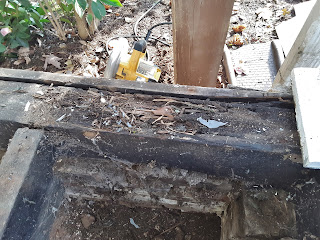 When the edge boards had been replaced previously, there had been rot that caused the carpenter to splice in another oak board. The fascia board was a full inch thick and about nine inches wide. 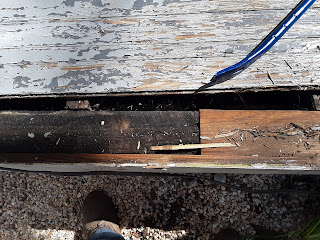 When the beams are 2 1/4" thick by a full 8" wide you can afford to put them on 2 foot centers. However, the new plastic tongue and groove decking boards manufacturer recommends 16" centers. The clay dirt under the porch was so dry that I kicked up dust when stepped into it. Nothing was standard. The near boards are nearly 14' long while the far ones are just over 12' long. 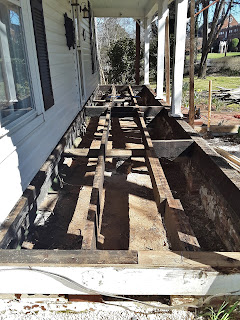 During lunch breaks I sat on the back patio, either sheltered from the sun or bathing in it, depending on the temperature and wind. 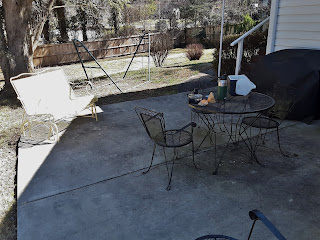 I don't think that usually scowl, but bright sunshine can bring it on even on a pleasant day. 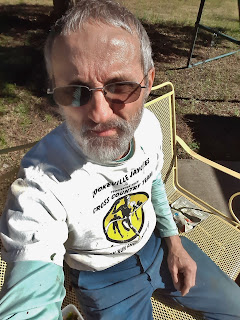 The shadow of the tree trunk and my own body make it a little hard to see, but the greatest rot was where rainwater splashed up on the fascia and underlying beam. I cut this whole section out and replaced it. 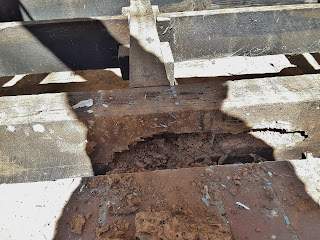 You can see that I doubled up the joists to approximately 12" centers. It is overkill I know but there was little use in moving old ones. It should hold a truck now. Putting in these plastic boards was more similar to installing hardwood flooring than decking boards, and it took much longer. Installing the first one took as long as the next ten. It had to be square on a framing that was not square. I sighted and fudged and split the difference and every other trick I know. I was able to maintain the over hang within 3/8" over the entire 26'. The last board overhung the end at an angle due to the out of square far end. The owner said he could build it up even before installing the fascia board. Only he I would know if I had not told you. 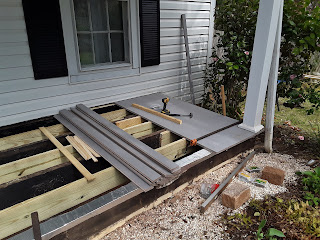 When I was finishing up, I caught the owner picking up scraps on his new porch. He and his wife were quite pleased and bought me a pair of chocolate brownies at the farmer's market while they were out. I helped him reinstall his yellow swing so that he and his wife have a swingin' place to retreat to on those balmy spring days. It was nothing of the sort on this day, exposing us to lower forties with 30 mph gusts. 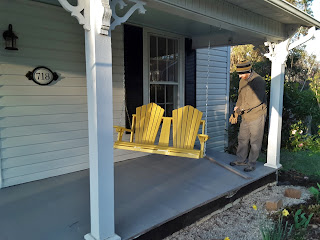 The owner wanted to install PVC fascia himself and he made the post base as I said which he installed later. That is the reason the left post appears to hover. It is supported out of sight by a 4 x 4. 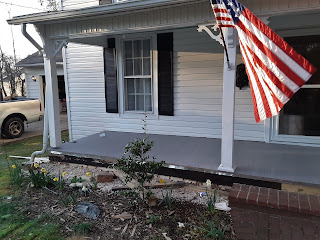 You can just see the ice and moisture barrier that I installed on the joists around the edges to prevent future rot and you can see the 4 x 4 support. As he said, "This should last another 150 years." Maybe longer I'd think. He certainly won't have to paint it. 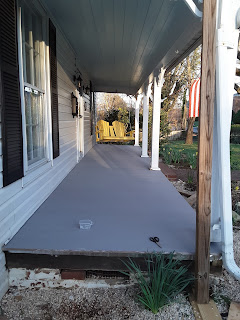 In the midst of any job are those moments of frustration, but overall this job was enjoyable, and the owners were flexible and agreeable. I am thankful to God for good work and good people to work for.
Posted by leon at 7:34 PM