I regret that I did not take pictures of everyone and at most events we went to when visiting family. But one cannot allow the recording of memories to get in the way of making memories, because the memories are more for the fortifying of the young than for the solace of the old.

After a pleasant dinner with my oldest brother and his wife, our daughter and two grandchildren on Friday evening, we went to take a hike a Haw Ridge Park the next morning with our oldest son and family. 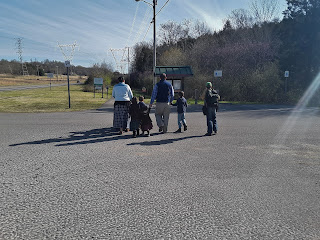 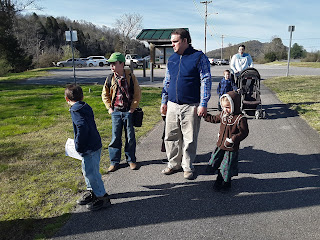 My wife was too cold, so the womenfolk left after a few minutes and went shopping. 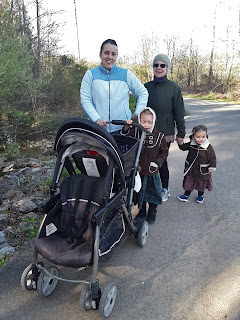 A good brisk walk kept us warm and the day quickly warmed. My hiking buddy Z is a strong 4 year old. I only had to carry him up the steepest hill. 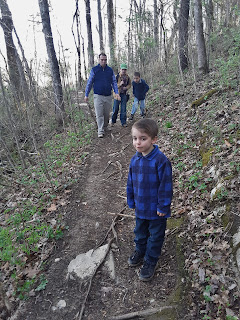 The wildflowers were breaking out everywhere. 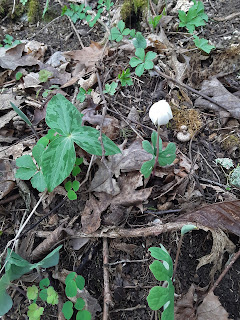 Some places they bloom and grow speak of regeneration and renewal. 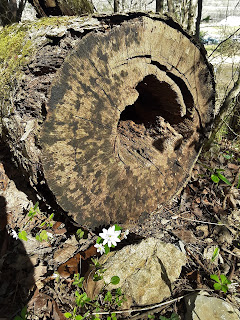 The park is a point in the bend of the Clinch River on Melton Hill Lake. 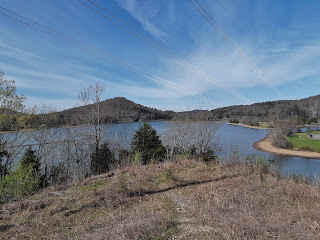 I don't know why throwing rocks into water is so much fun. I skipped 8 or 10 myself. 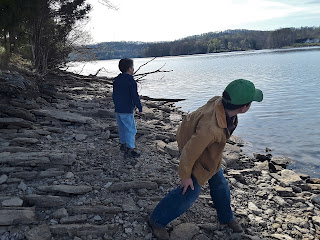 His father was explaining how the limb grew out to get sunlight. 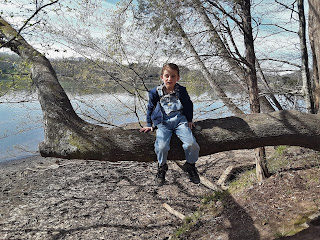 Yellow Trillium is common in East Tennessee and rare in Western North Carolina. Is it range or soil or rainfall? 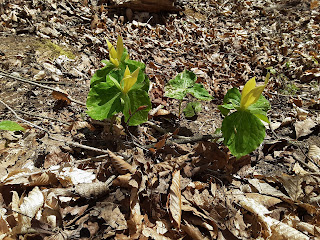 How did this bloom manage to open through a fallen leaf? 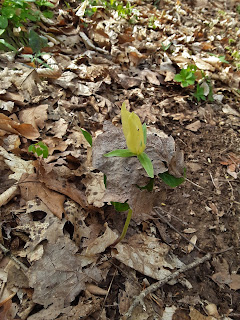 I think that the Beech Tree was dead before it fell based on the extent of rot and the lack of small branches. There were many big ones in this woods. 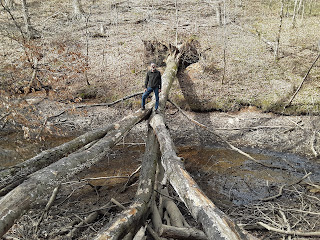 My oldest grandson is very energetic and loud and intelligent. 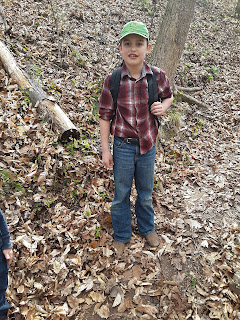 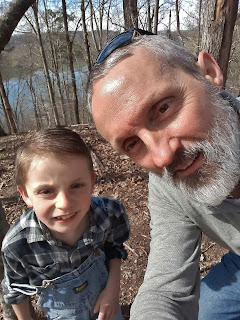 This is so unlike me. I took two selfies in a row. The winter forest has a look and feel all its own. 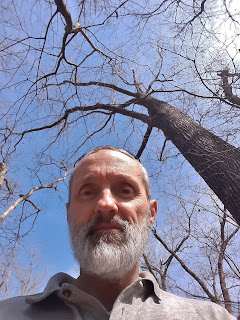 At one point we climbed up a steep hill to slide down the leaves. I had to catch a picture of the brothers together. 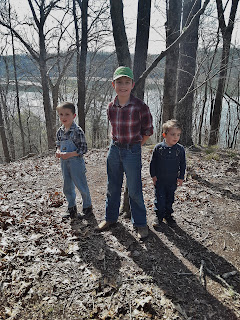 After we finished the hike, we headed to a nearby playground and picnic area to meet the girls. On the way I stopped to snap a shot of the infrastructure upgrade, a new electrical substation. You can see the old stack and new one at Bull Run Steam Plant in the background. We think everything technological is computers, but without these devices invented in the late nineteenth century, our society would not function. And the idea that we can subsist on renewable energy sources alone is ridiculous. 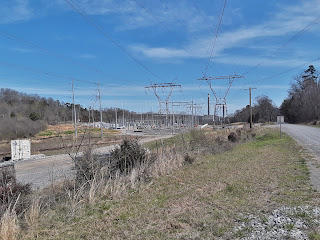 I had the worst time getting a good picture of my son's youngest. He is a calm child, but he did smile at me when I was swinging him and when his sister laughed. 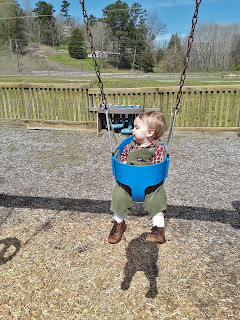 Her daddy was swinging her. She is such a socialite. She went up and sat down next to a grandmother and gabbered away and pointed. The woman talked to her. The children came back and oohed and aahed over her and the mother questioned her as to where her mother was. We were all watching from less than 100 feet away. Her daddy says she does this kind of thing at church all of the time. 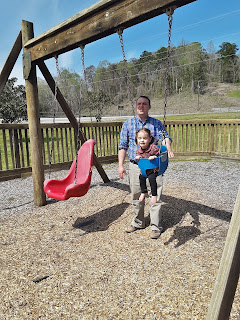 We had a good meal but it was a bit chilly. 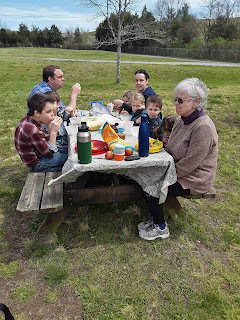 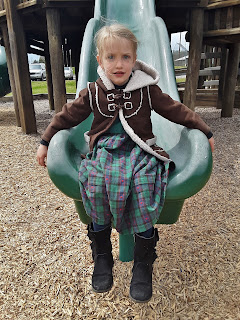 And here they all are in one place, smiling, or almost. 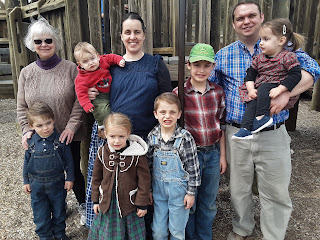 Saturday afternoon I dropped my wife off at her sister's apartment to visit while I took a long walk in a nearby park. Our oldest son took us out for dinner so that we could have some adult conversation away from the children. We were spending the night at my older brother's house. We stayed up late all three nights and talked. Sunday morning my wife and I went to church and saw a nephew and four of his children, and several in-laws. The singing at their church is so heartfelt and loud. The sermon expressed a deep belief in the authority and sufficiency of Scripture. It was all very encouraging. After church we went over to my oldest brother's house for the weekly family gathering. There were my three brothers, four children of my brother and mine, and 16 grandchildren of ours. There were 30 of us there in all. 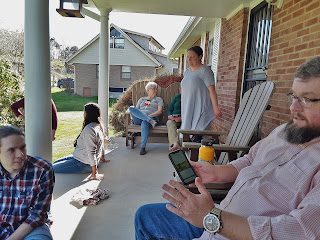 My sister-in-law is always good for a story based more or less in truth. 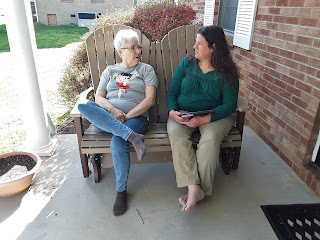 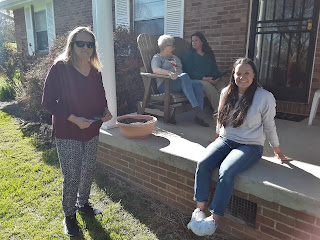 Flipping a partially filled water bottle to land it on its base seems to be a thing, but they were stepping it up a notch by trying to perch it on an overturned glass. 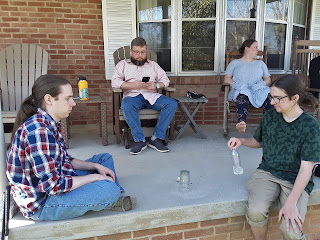 I'm guessing it was a big fish story my niece's husband was listening to from my younger brother. 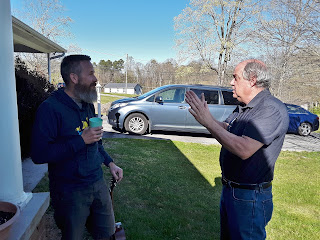 My wife and daughter spent some good time together this weekend. 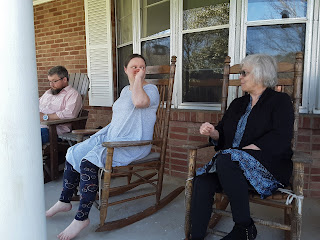 We were exhausted but filled with joy at making meaningful connection with family we have not seen all that often in the last few years. God has blessed us with abundant posterity. We pray that He may bless them with His salvation and service for Him.