The Smoky Mountain Highland Festival Games is now held at the Townsend Visitor Center. It is an excellent spot with a large field and mountains all around. The Visitor Center building looks like a large log cabin. 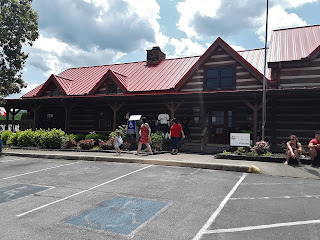 We spent time perusing the booths. Scottish history seems to be all about dress and weapons. 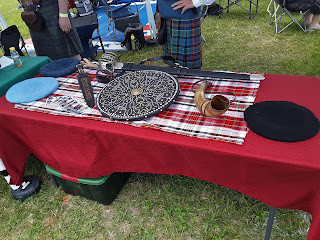 When my wife and I first arrived, however, we found our daughter-in-law and four grandchildren watching a weapons demonstration. I should have pointed out that they were wearing full face and neck guards and thick padding, lest the children think you can try this out on an unclad sibling at home. 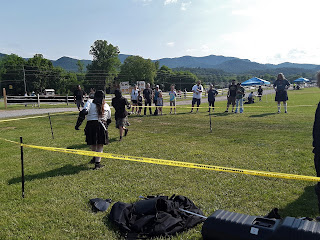 The whole family decked out in their Scottish regalia, here watching the swordplay. 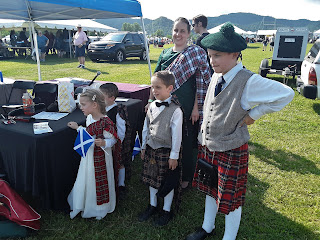 One of the clansmen offered for the children to weigh the shield and sword. The grandson said, "It was quite the sword to wield." No, really, he did. 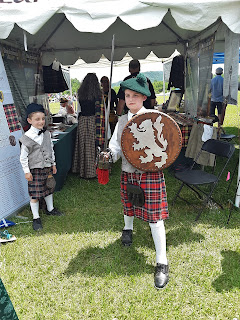 His little brother had to settle for a dagger and his Mamaw is eyeing his little sister. 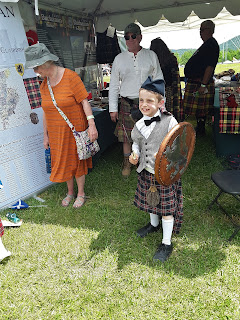 The maiden in her Royal Stewart sash can hold it with a firm hand, too. 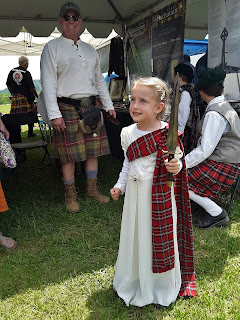 Big brother cuts quite the figure in armor and bonnet. 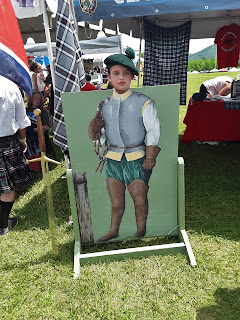 In their outfits and full sun, it was quite warm, so mom and dad brought water and snacks for mid-morning. 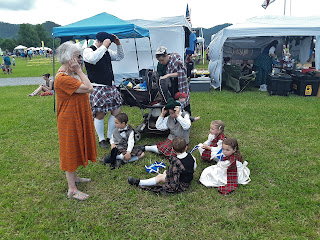 Mamaw is happiest when she is interacting with children or grandchildren. 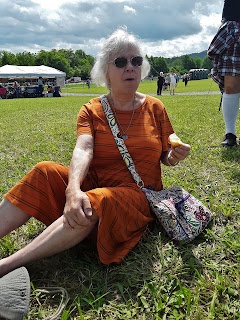 Food all around for the young warriors. 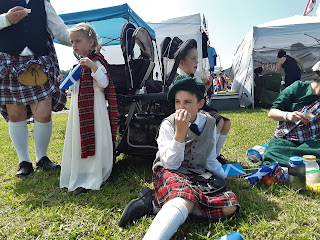 Later we watched the pipe and drum bands march by. 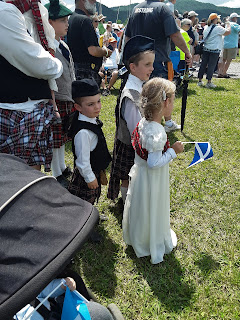 After their performance on the field they came back our way, still droning and drumming. 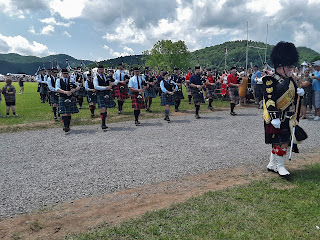 Behind the Visitor's Center, under a pavilion, the lasses from young girls to young adults were judged for their dancing. I was interested to see considerable difference in ability. Some struggled through the highly energetic and precise movements while other flowed with precision and seeming lack of effort. 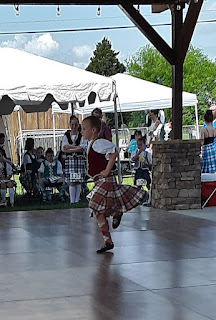 Our son's family was the only one we saw with the whole clan dressed for the occasion. Many people said how cute they were and took pictures. We actually are part of Royal Stewart ancestry, one of the protectorate families. There is more to my clan, four more children and four more grandchildren, but we most definitely enjoyed interacting with this branch of the clan. 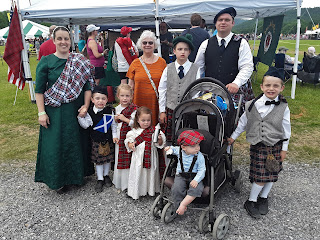 In the parking area, before we left, the grandson at left in the picture wanted to show us the quilt that he made. Yes, mom and dad assisted, but they said he did most of the work, including stitching the squares together. Mom did admit that she had to redo a few of those stitches before she sewed on the border. Quite amazing for a first quilt, though. 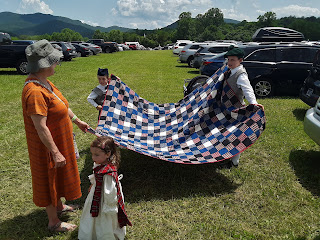 All were tired and satisfied with the day. Heritage is interesting and gives a sense of belonging, and whether noble or ignoble, does not determine who you are. I am thankful for the grace of God in my heritage and overcoming parts of it, but also for my posterity, may it ever increase and deepen in knowledge of God.
Posted by leon at 7:07 PM