Most people, including myself, only know of Laurel Fork Falls out of Dennis Cove. It turns out the creek and tributaries have many other small falls and cascades. 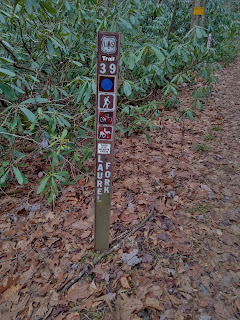 So, my son and I went to find a few of these. 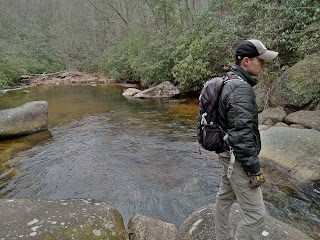 There are transitions in cold water stream environments with respect to temperature. The least of these is sufficiently cold air temperature to freeze the spray, as in the following scene. Flowing water is mesmerizing, blocking out distractions of forest and mind. 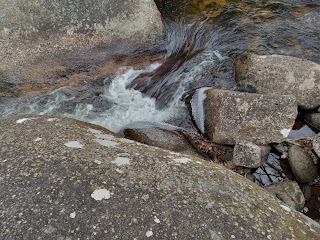 Anything straight in the woods is either fascinating or suspect. We are down in a deep draw, almost gorge, and here runs 100+ yards of straight creek bed. Notice the mid-30's Rhododendron leaf droop and the Doghobble at left foreground. 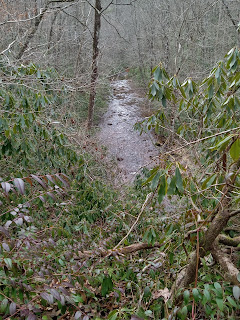 On the way to the falls were at least four creek crossings. In 30-degree weather I have crossed creeks before, but we didn't feel any need this day. The first three had stout cables you could shiny across. 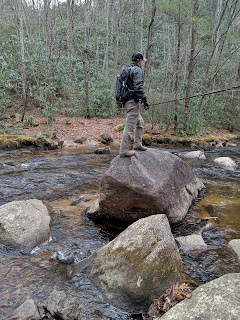 My son led the way. 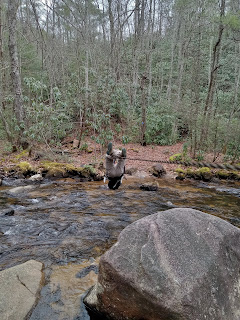 The locale is Upper East Tennessee, but the geology is decidedly Western North Carolina. Now I know that geology is no respecter of political boundaries, but generally speaking, ETN is strongly sedimentary and WNC is igneous and metamorphic. As my son pointed out, the geology is similar to WNC, but the vegetation is definitely ETN. I think that the increased rainfall and encroachment of native flora populations are probably the explanation. 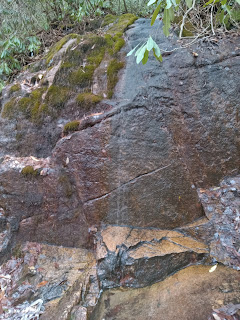 This is another cataract among many on a steep section of creek. 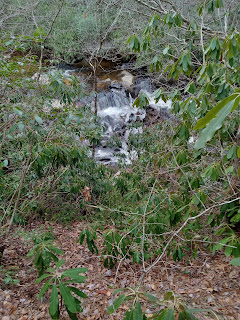 At the top of the steep section of creek was a very flat section with few rapids. The graded sandbar was unexpected in the otherwise dropping creek. It was in this section where we decided to turn back rather than wade barefoot in cold water on slippery and jagged rock. It was a testament to our chill attitude of a "stroll in the woods." The result was not getting to the most substantial falls. Oh well, a warmer day would invite wading. 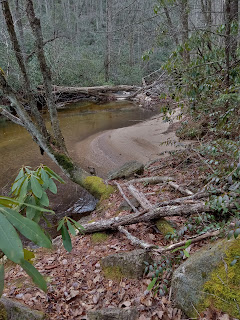 On the last crossing of six (three out and three back), I had my son snap a picture of me crossing the creek. It was the only non-level one and much more work. I was amazed two days later by the forearm soreness, which showed how out of shape I am for climbing. I've got to get at it. 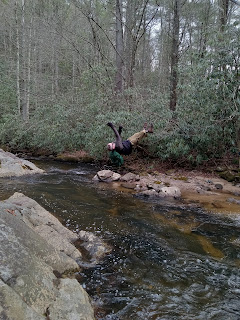 The last falls was oddly shaped and gave little evidence of possible high flow during heavy rains. We got to it by another short trail from the parking area. 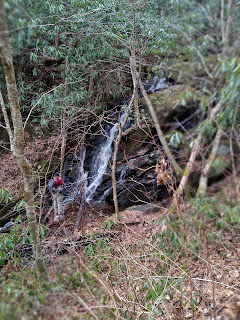 The spray zone is not often dry, I guess. 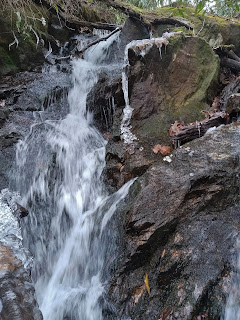 The spray caused the more interesting part of the falls- icycles. 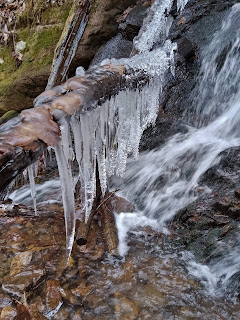 It seems that the icycles more forcefully in the spray are being eroded into jagged ice hangings by the above freezing spray. Also, notice the rounded blobs on top of the log formed by splattering water. 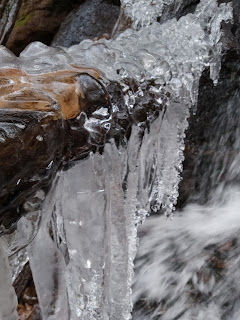 I was so thankful to be out again in the woods, and with my son. It would be fascinating to go see the creeks after the arrival of multiple days sub-freezing and sub-ten degree weather.