She had been to this place before and it turned out to be extra helpful since I did not know where the trail starts. I went past it, her telling me she thought we had passed where the trail starts. I said I wanted to be sure by going on up a little. It was silly but I'm glad that I did anyway. We found this interesting rock outcrop and cascade along the creek. The area has copious amounts of limestone. 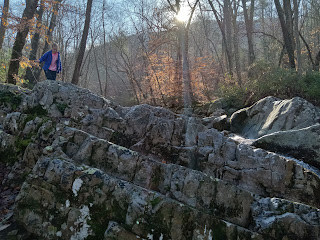 The water was too cold to wade, but it was pleasant with the sun coming out warming the air. 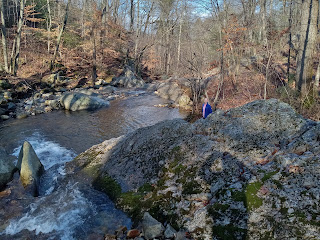 The creek was fringed with multi-colored pebbles and stones. 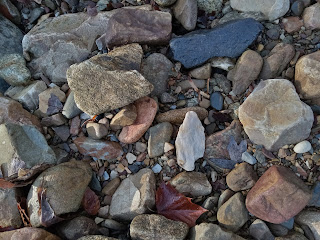 After that little detour we went back to the trailhead. The trail begins by crossing a creek. 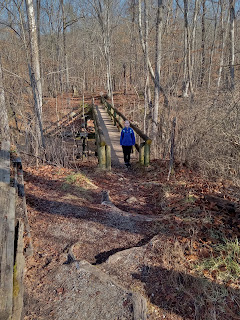 I didn't know what the stone pillars were for until a few hundred yards into the woods. There was the faint outline of a foundation and a sign describing the first Boy Scout Camp in this part of Virginia on this rather large, flat creek bottom. 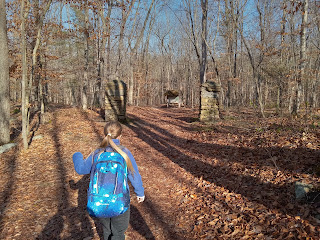 Only a little way into the woods was there a sign revealing the destinations. 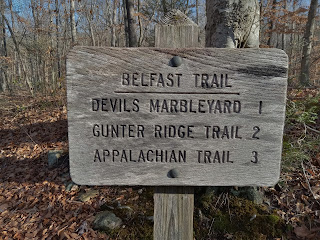 The trail crossed the creek several times as it wound gently upslope through an open woods. 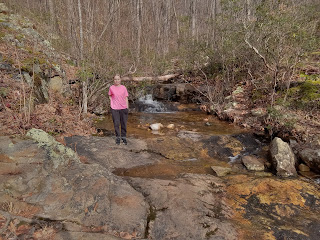 You can begin to see the marbleyard as you approach, but nothing prepares you for how large it is. 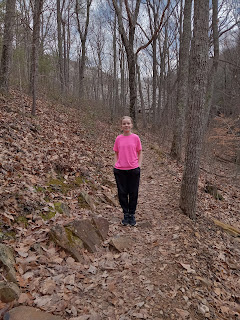 To the right of the boulders is a creek and falls of no impressive height or flow. 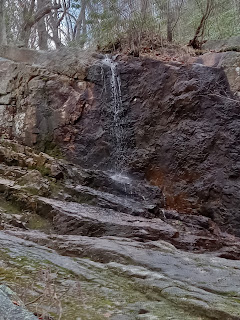 If your goal is to walk up the boulder field, there is little way of knowing what a task it will be. For one thing, what appears to be the top in this picture is not more than about 1/4 of the way up. 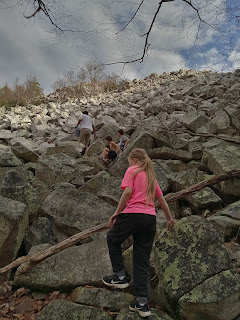 Check out as we go up how the boulders get larger. At the bottom they are the size of a night table or desk. As you go up they increase to minivan size and then to room or small house size. 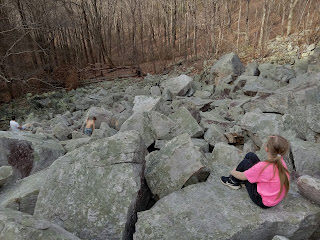 Finding a reasonable way through the field for my smaller companion was quite the challenge. There is real rock scrambling in places. 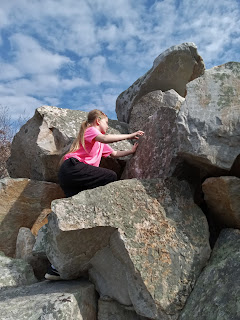 In fact, we came to two places where it was easier for her to go under the boulders than over them. It was more fun, too. 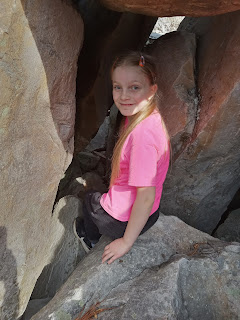 At about the 2/3 distance we caught up with a family of 6 lounging on this large boulder. We exchanged photo taking duties. It is enjoyable to take pictures for someone else and makes for much better shots than selfies. 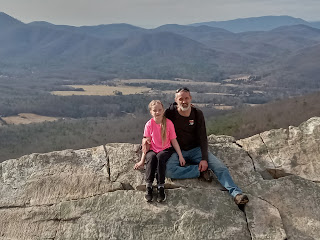 The rock is predominantly quartzite and would be gleaming white in the sunlight were it not for the lichen. 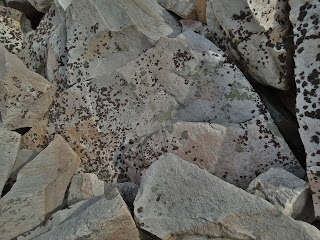 We took a lunch break at about the 3/4 point. 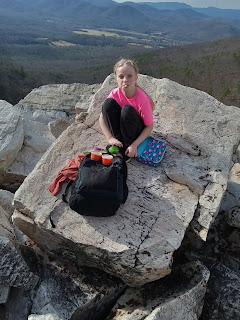 The boulders just get larger and larger, like you are in a raging sea of stony foam. 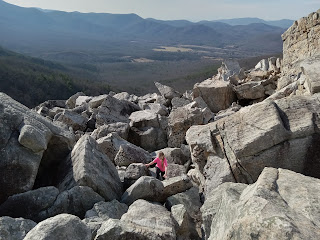 I believe that the next picture reveals the origin of the marbleyard. On the right is a 40 feet high cliff that runs along the top and down more than 1/2 of one side of the field. Between it and most of the boulders is this gap. The rock changes composition to a more platy and brittle rock that is not as white. It seems reasonable to me that an earthquake caused the rock outcropping to split so that the part on the left started shattering and bouncing off downslope. 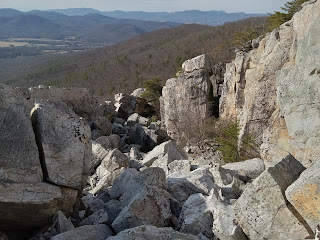 When we finally reached the top, we sat down to finish our food and read Genesis 1. 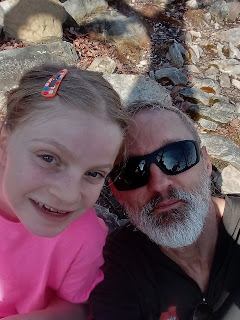 Back down slope a hundred feet from our above food stop is the top of the cliff. We exchanged picture taking duties with two young women. Some of the upper boulder field is obscured by trees, but you get the idea of how large it is. I would say that it is easily 1/2 mile long. 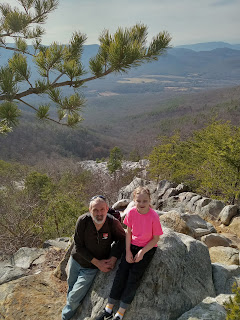 There is a trail along one side of the boulders which is much quicker for regress. I pointed out this Table Mountain Pine cone growing out of the trunk. 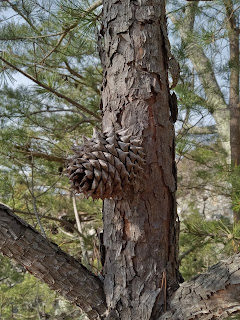 My granddaughter was not so occupied with climbing and wanted to take pictures on the way back down. That allowed me to get in the picture more. 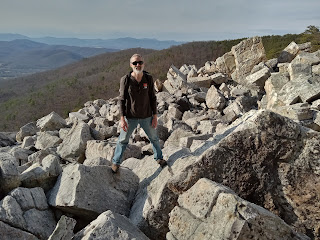 She got warm, so she splashed creek water on her face. 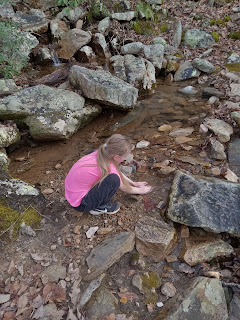 We have come full circle. 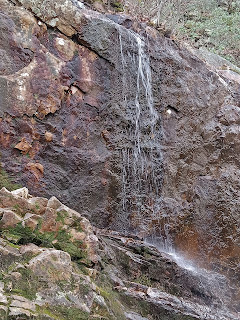 I also pointed out Chestnut Oak to her, of which this is a particularly large one. 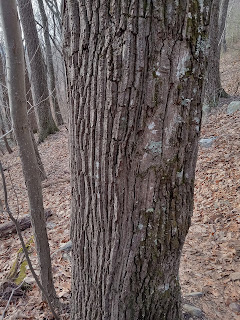 We are back at the car crossing the creek. 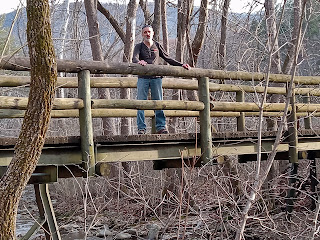 Down the road a short way is this curious historical site. Making anything, including war requires infrastructure. Check out the details. 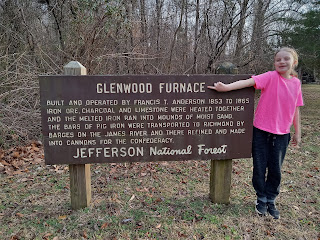 Pretty impressive that it stands since 1853. The iron lentil plates holding up the stone over the entryways are set to collapse in not too many more years, but it is hanging on for now. 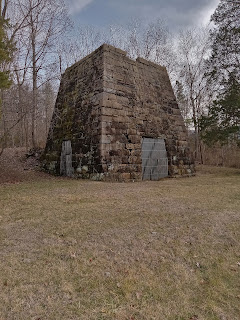 The mountains of Virginia are not so tall as those in ETN and WNC but they sure are steep-sided. The James River cuts right through the middle. 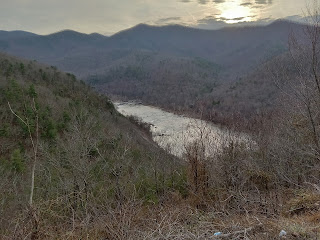 We had left the house at 9:30 and arrived back just in time for sunset, weary and satisfied adventurers. 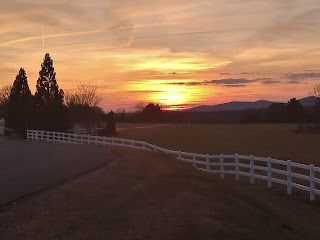 Can you think of a better way to spend your birthday? I am not rich or especially strong to go on far flung or difficult adventures, but I am blessed to have small and beautiful challenges, frequently with those I love. Life is good because God is good.