Something Old and Something New

Repairing something old can be a challenge. I knew that given the sagging Trex boards there was much rot underneath. I told the owner and her son that the whole deck superstructure would need to be replaced since the deterioration would be all throughout. They had just thought I could replace few boards. 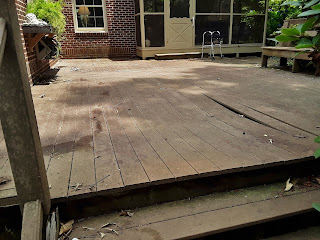 Much of the damage is not readily visible because of the plastic Trex boards above. It is obvious from the picture that the main floor was scary to walk on, but so were the steps with rotten stringers and posts. 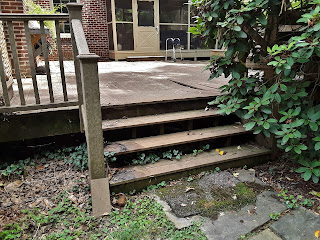 The owner's stated goal was to replace it as much to the same original condition as possible. And since Trex boards don't really deteriorate, to reuse those. This seemed like it would be easier than building a deck from scratch since the dimensions were already set and all of the decking boards already precut. 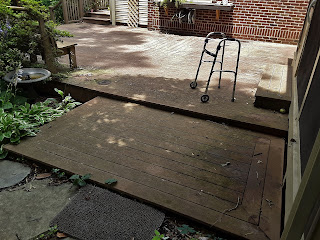 But things are not always as they at first seem. Reusing boards means you need to take them up carefully enough to not significantly damage them. In this case, that meant removing 26 screws in a 12' board, or several thousand screws in all. These screws required a square headed bit, which twists out easier than Philips or T-25 screws, especially when rusty. 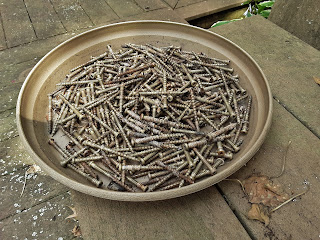 I was, of course right about the joists. How did I know? First of all, you don't put down Trex boards onto wood joists without first applying joist tape whose purpose is to prevent trapped moisture from growing mold. Secondly, in the case of this deck, there were the additional problems of joists so low as to disallow air drying out underneath and some joists were even in the dirt. Thirdly, the deck was under big trees and surrounded by tall bushes, further preventing drying out. Fourthly, one of the steel gutters above had a long rusted out section that had been pouring rainwater onto the deck for at least several years. Fifthly, all of the detritus (leaf and other litter) resulted in a profusion of ants. The result was mold and rot. 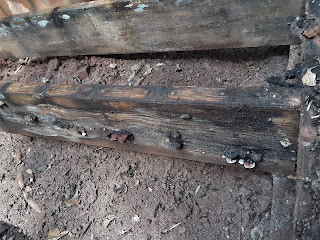 The few almost decent joists had been replaced 15 years earlier when the Trex was installed, but they were on their way out, too. 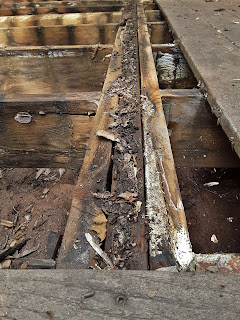 There were several ant nests. 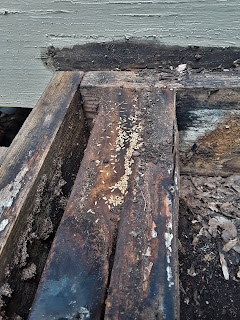 This is worse than it looks. 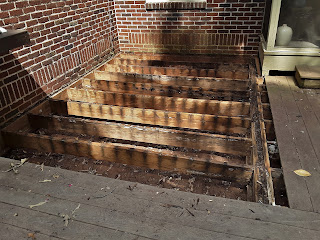 This is more revealing. 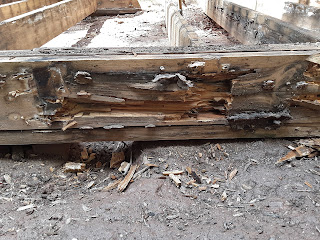 Here is where they thought that I should just replace a few boards. The joists were collapsed before I removed any decking boards. 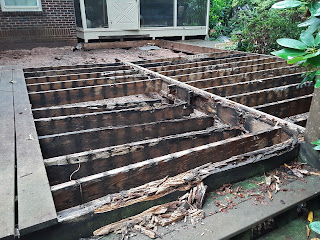 I tried to convince the owner to raise the deck to the level of the screened in porch and back porch for easy access from the house and increased air flow underneath. She only agreed to raising halfway or one step higher which did increase airflow. This rise required me to replumb a water faucet, which in turn resulted in the following gap that had to be filled in with fittings. 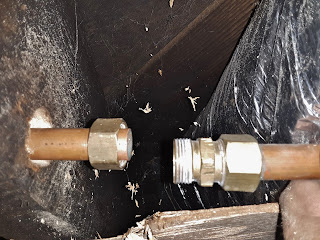 Hand dug holes and abundant posts along the center support of the joists I aligned with a string. 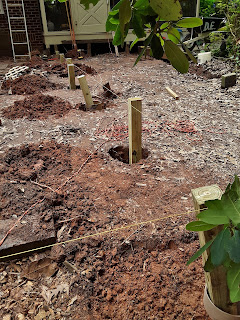 In order to keep out the insects, I tarred the posts and set them in concrete. 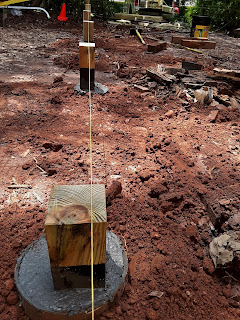 The owner's son helped me several hours most days, particularly with moving lumber, digging holes, and stapling up wire around the deck to keep out the former resident of underdeck, a groundhog. 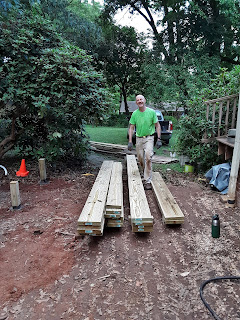 Post along the edge to the corner and near the step were 1/8" from perfectly aligned. 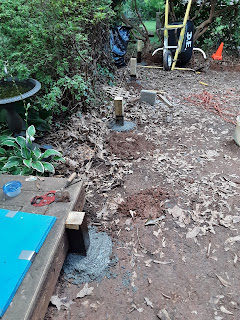 The wall plate was well bolted to the wall. Notice the very old concrete faucet basin. 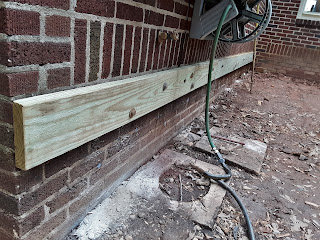 The mailman came around the house one day to inspect the progress. She also told us that there was a snake on the driveway that someone needed to kill. Upon asking what kind it was, I requested that they not harm it. I gently placed my boot upon its neck and placed it in the empty, plastic screw box pictured. I left it in a cool place until day's end when I took it home and released it on the property where we rented. Black Snakes are beneficial. The step which had been at the screen door was rebuilt for stepping off of the deck. Here all of the superstructure and decking are complete. 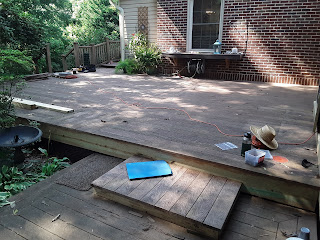 The steps look the same as earlier, but the posts inside of the covers and the stringers are new. 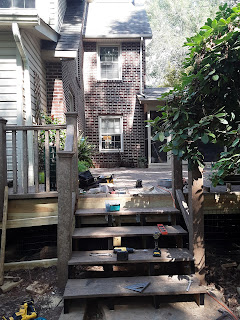 Working with the existing Trex boards meant putting back joists and decking in the original configuration. The 18' crossboards give character to the deck but increase the complexity of the joists underneath. 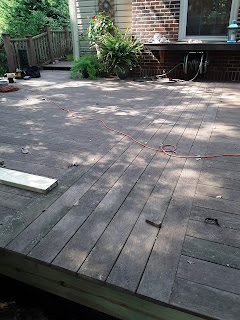 The last phase of the rebuild was to repair the benches. Ants had made passages up through several of the bench legs to chew away at the beams. 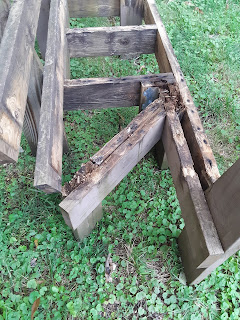 Following is the repaired benches in place with some of the joist tape to prevent a repeat of the moisture, mold, and mandibled insects. 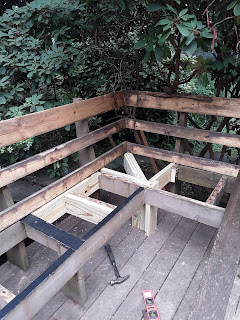 Late on the last day we were still repairing the bench. 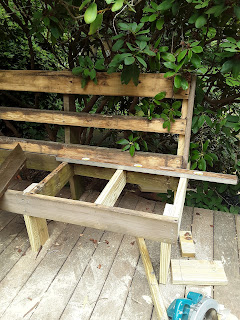 Finally, the deck was restored to its final glory, and I believe even better for longevity and serviceability. I had to leave a little final cleanup for the owner's son. He was amiable and helpful throughout the process. 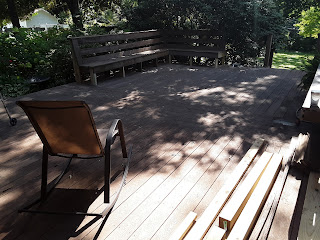 A job completed well brings satisfaction. I thank God for the work, the accomplishment, the friendly people and good conversations. I am also thankful at the moment for work indoors on rainy and hot days. 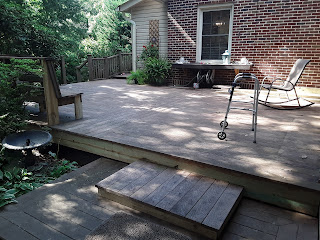