The Rafter of Turkeys: I see no less than 16 in the picture. Of course, I have the option of zooming in on the original. 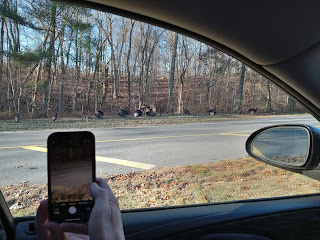 First Ice of the Season. It is interesting how it forms in long bars across the surface of the water. Though very fragile, that makes for quite large crystals. 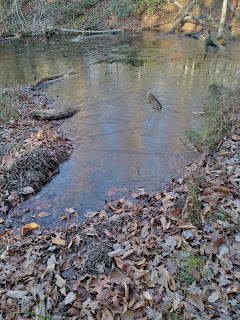 The lake between the ridges is fed by numerous small streams around its periphery. I guess that they decided to short cut the trail across the lake. There are most usually numerous waterfowl, but I guess the cold kept them huddling or else they have already flown south. 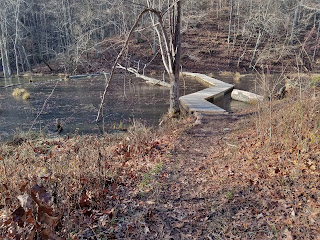 The woods were quite open on the way up with a predominance of Chestnut Oaks. Using GPS has its disadvantages. With a map you have a good idea of where you are going. With a GPS you have to constantly look at it to stay on track. We didn't at first and missed two turns, probably costing 30 minutes. The fire tower is almost hidden by the trees and certainly not an eyesore from further away. 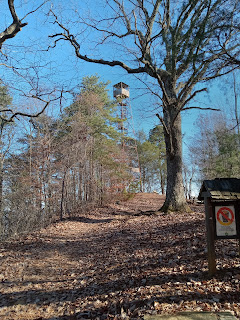 It is not for lack of height though. I estimate this to be an 80' tower. I rock climb and am not nervous when I am tied in and have checked my gear but going up these steep steps with very open rails was a bit nerve wracking. The steps were in good shape, but a few boards on the landings caused me to step at their edges to prevent the possibility of falling through. I've seen worse. 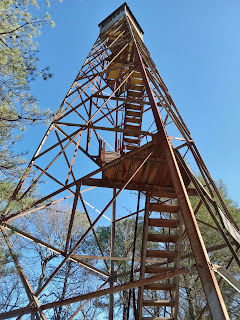 This is a northwesterly view along the ridge with the Holston River winding around the end and Eastman Chemical at the white plume of smoke. 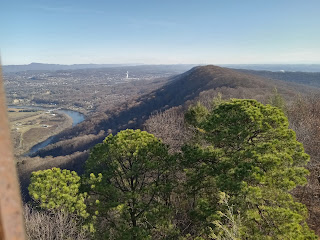 The next two pictures show Holston Ordnance Works which was built by Eastman during WWII and still makes ammunition for the Army. 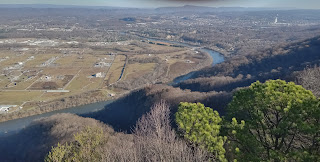 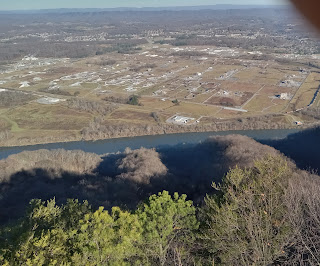 Looking westward you can see the river rounding the southwestern end of the mountain. 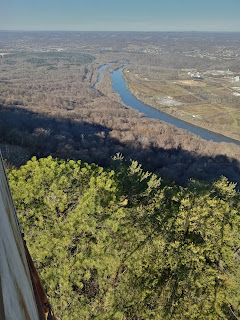 I frequently wonder what was going on during the biblical worldwide flood that caused this ridge just here in this orientation with its steeper northwest slope limiting the river to flow around it. The Ordnance Works and Chemical Plant appear to be on prime alluvial deposits that should be farmed rather than be industrialized. The whole of the Great Valley from the Shenandoah Valley to Lookout Mountain must have been a wrinkle in the crustal fabric during that catastrophic event. 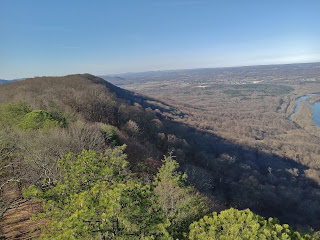 I think that the highest peak to the left is Chimneytop Mountain in Greene County. I fouled up my pictures easterly by getting my fingers too near the lenses. 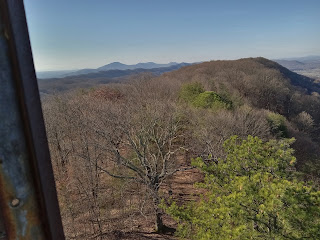 I mentioned the 1/2 hour side trips because my hiking partner was supposed to be home to go with his wife to dance class by 10:30. Just after we left the tower, he told me that he texted her to say he would be to late to go to class. I replied that it was all downhill or flat back to the car and that we should jog. We jogged intermittently most of the way back. He arrived at home at 10:40, on time with a bit of rush to get into his dancing shoes and out the door. I am always amazed how a few hours in the woods does me a world of good. We talked theology and nature, I contemplated geological history, we got a good workout, and we came home refreshed in spirit. I did stop one moment to snap a picture of the fresh beaver work. We passed one beaver dam. The park is quite the nature preserve. 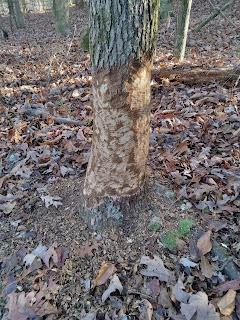