Stoney Creek runs between two parallel ridges that range from 3600 to 4200 feet in elevation. At the upper, NE end is Cross Mountain that crosses between the two ridges and separates Stoney Creek from Shady Valley to the NE. At the gap on Cross Mtn is a parking area where TN91 crosses the Appalachian Trail. As my son and I discovered, this little section is an excellent Sunday afternoon stroll for the family, but everyone else was coming off the field a 3 PM when we started out. It was a lovely afternoon as you can see. Most of the cattle were in an adjacent pasture. 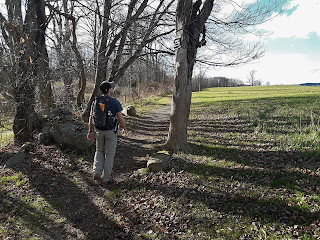 The fences and gates were well kept for the bovine resident's security and keeping. 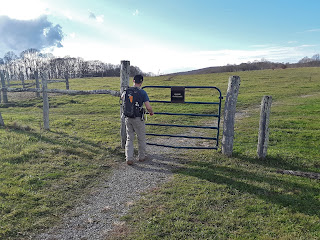 The views of Shady Valley and the mountains beyond were excellent. 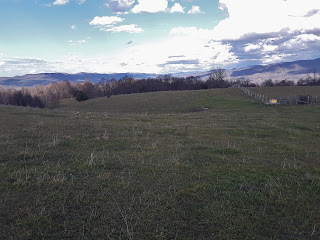 After nearly a half a mile of fields, the trail crossed a fence into an open forest of mostly young-middle-aged hickories, oaks, and yellow poplar trees. After about 1/2 mile of this easy terrain, my son said, "I want to show you something. Let's go down here." We went to the left off of the trail along a gradually descending ridge, turning right after a few hundred yards to plunge down a steep slow into a deep draw. At the bottom was a leaf strewn, rock slick creek and rhododendron thicket. We came to the first waterfall, a cascade I'd call it, which you see my son descending. 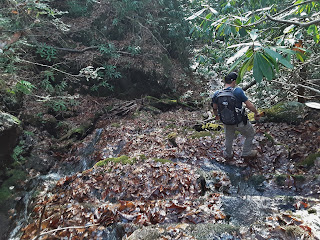 The flow of water was minimal, but that didn't diminish the beauty or seclusion of the spot. We were somewhere along the upper reaches of Stoney Creek. We later determined that it must have been the North Fork, because of what we came upon next. 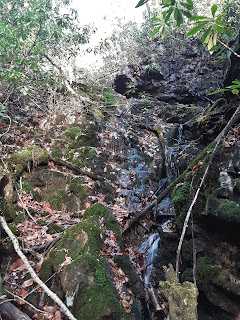 Moss covered is one thing, but this rock had splash zone flora. 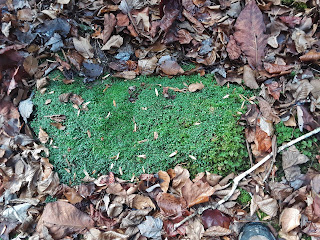 There were some curious mixes of fern and ground cedar that I have not seen before, and the purple leaves were interesting. With their Autumn change and happenstance position surrounding a ground cedar stem, I thought that I had glanced a new species at first. 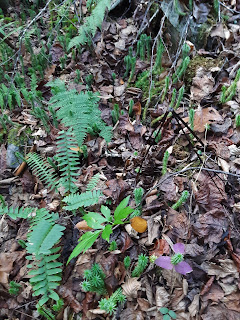 The second waterfall took much more effort and time than the first one but was well worth it. Here you see when it first came into sight after the need for a wide berth around the cliffs. 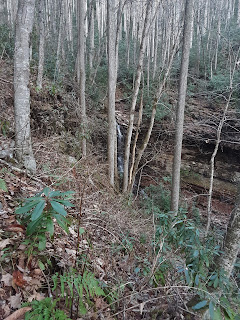 The slide my son is on below the falls is amazingly slick with leaves, algae, slope, and barely textured rock. 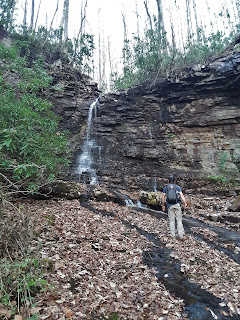 Perhaps it is 20 feet tall, but there was evidence that it could support some significant flow. We discussed the rock layers, limestone and shale mixed in. 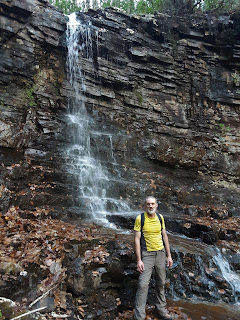 We could not stay long. The light was getting dim. I told my son that I did not want to bushwhack along a slick creek in a rhododendron thick and briars in the dark even with headlamps. The only thing for it was to point straight up the opposite ridge 500' + in less than 1/2 mile to the Holston Mtn Trail. This is when I know that I am out of shape or getting old or both. We found mostly clear forest. The following picture shows the light conditions just after we reached the top. It was then that we realized how unmaintained this trail is. I very much wanted to get to the AT before the end of twilight. It was better than the rhododendron, slick creek below. All you have to do is stay on top of the ridge going in the right direction, in this case away from the sunset. 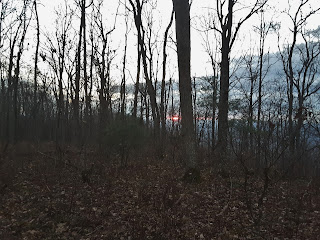 We arrived at the AT and Double Springs Shelter just in time to follow the more traveled and rock and log-lined trail. As we passed the shelter, a couple was cooking supper by headlamp. The Moon was near full, reflecting off of leaves and rocks sufficiently for us to not use our headlamps. It was very pleasant to amble back across the fields to the vehicle. 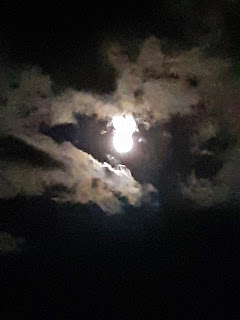 Pleasant all the way around- temperature, light and dark, field and forest, open and dense, slippery and well-traveled, shallow and steep sloped, easy and deep conversation- I was thankful to God for the short, intense time in the woods with my son. And I had been up Stoney Creek many a time in the past, but never so far up it as this time.